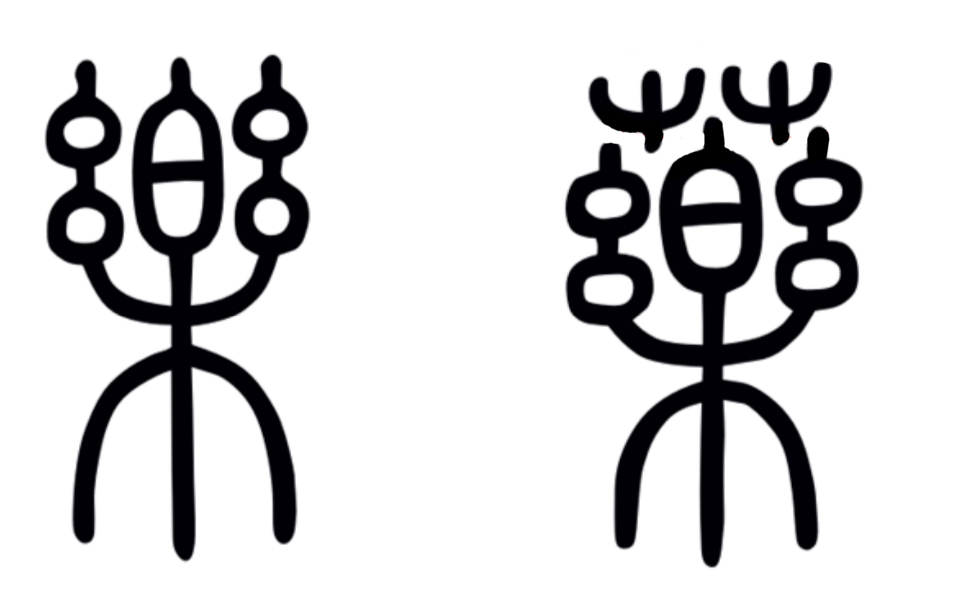 The origins and meanings of the Chinese character 琴 for the musical instrument, qín, now mostly called gǔqín (ancient qín), seem oddly elusive in modern times. It has been suggested that the two structures occupying the upper portion represent silk 丝 se or even two, possibly jade, 玉 yù (traditional variant 王), ‘goose’ feet string-anchor protrusions below the instrument. Although there are indeed two, often jade, string-anchor protrusion on the qín, they are located on the lower and not upper face of the instrument. If they are intended to be pictorially representative, one would expect them to occupy the lower portion of the symbol 琴 an not the upper. Perhaps these jade protrusions hark back to the older se zither which indeed had string-attachment protrusion on the top surface. The lower portion is often thought to reflect 木 mù, the wood of the instrument. This would then render a meaning of “silk on wood”, or some such cognate. We can also argue that the lower portion of the character produces the phonetic 今 jīn sound for ‘tsien’, a common modern pronunciation for the qín in modern Mandarin.

It has been suggested that 樂 yùe (music) and 藥 yào (medicine) have the same roots in ancient Chinese script:

Here, 藥 yào has the addition of the ‘grass’ radical 艹 cǎo above the remainder. Arguably, both the historical versions of 樂 yùe (music) and 藥 yào (medicine) could have graphically depicted a person singing and waving musical rattles, with the addition of a herbal element for the latter, used by chanting and waving shamans in healing rituals. This would certainly be in line with our usual image of an historical or tribal shaman.

Without doubt, 樂, 藥 and 琴 share a lot of superficial similarities. But are these similarities only superficial or are they indeed fundamental? We understand that Chinese character symbols or words often represent actual items, but also can confer a deeper meaning. If we take the character 玉  yù (王) and consider its meaning not only as ‘jade’ but in the broader understanding of ‘elegant’, ‘refined’, ‘beautiful’ and ‘pure’, we see that the character 玉 yù might be an adjective here rather than a noun.  And what of 今? Is this a phonetic element sounding ‘jīn’ to give the pronunciation “tsien”, or is it an indicator from the derivative of 今 jīn (in the mouth) and 口 kǒu (mouth) combined normally as 含 hán and  吟 yín; ‘to recite’, ‘to chant’, ‘to vocalise’? Or is it indeed both phonetic and descriptive? 今 is also a symbol used in qín musical notation to indicate a kind of vibrato.

I suggest that the two elements of the character for the 琴 qín musical instrument might today best be understood as those of 王 yù and of 今 jīn. Doubling the symbol 王 has the effect of strengthening its meaning and of mimicking the doubled symbol elements of both ‘medicine’ and ‘music’, music being a form of healing medicine. In a similar way, the symbol 今 imparts both the meaning of chant and recitation while adding the phonetic sound ‘jīn’.

Combined, they leave us with a sense of elegant recitation and medicinal music. I propose, then,  that the modern character 琴 qín could indeed derive from 王 yù and of 今 jīn and does deliver the meaning of “elegant chant medicinal music”, pronounced historically as jīn. This is arguably the very most appropriate appellation of the 琴 qín instrument and its music.