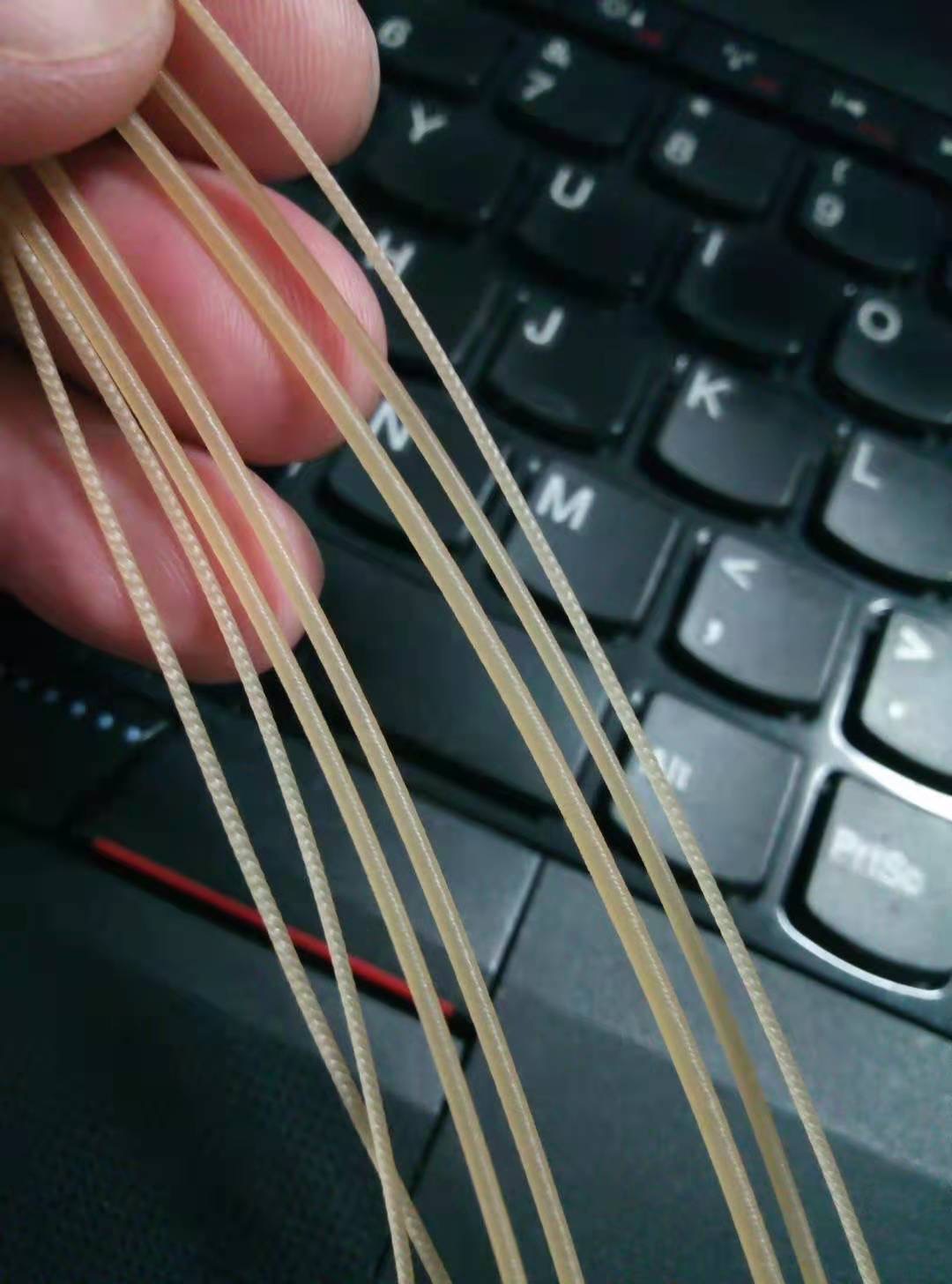 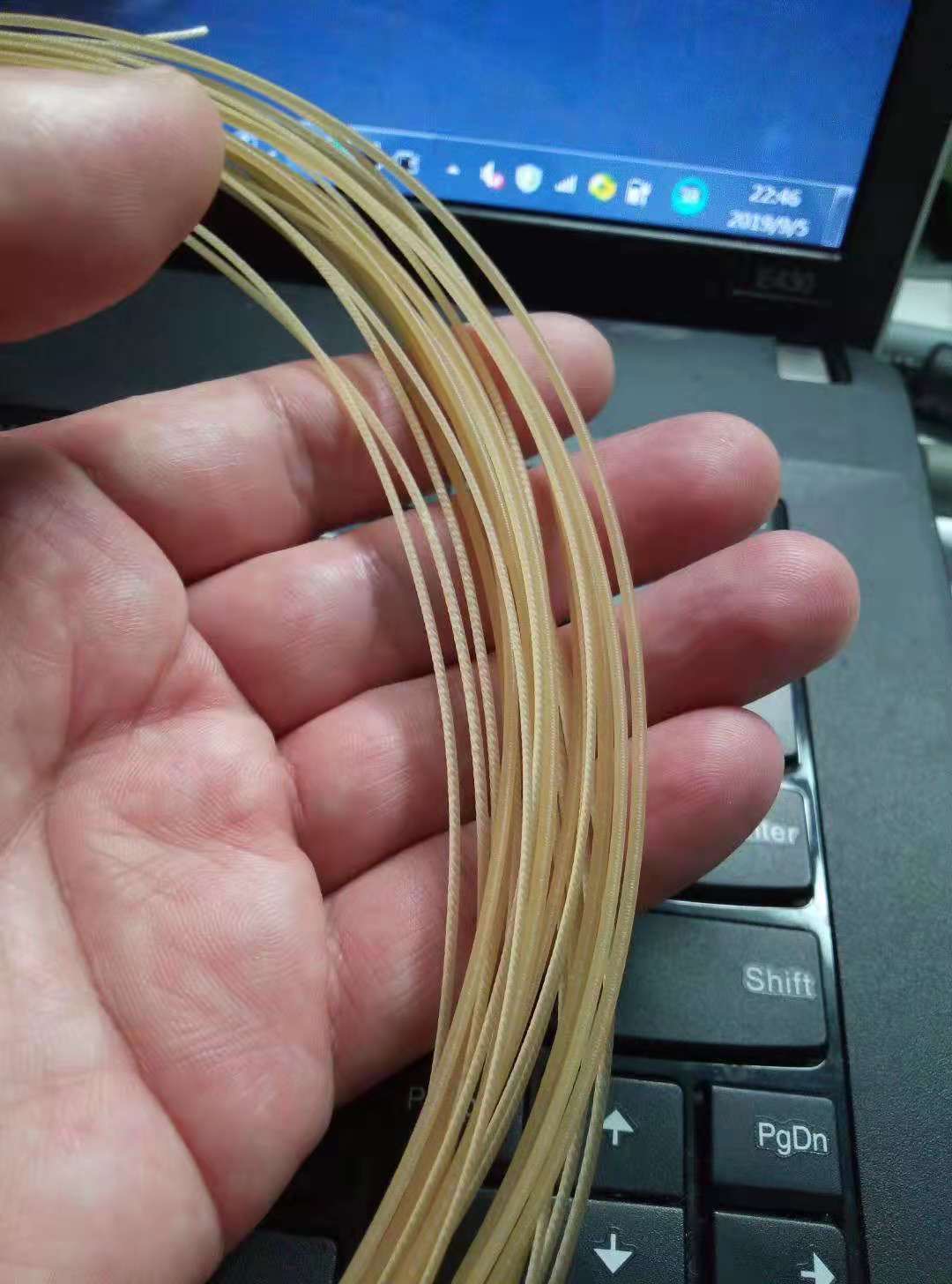 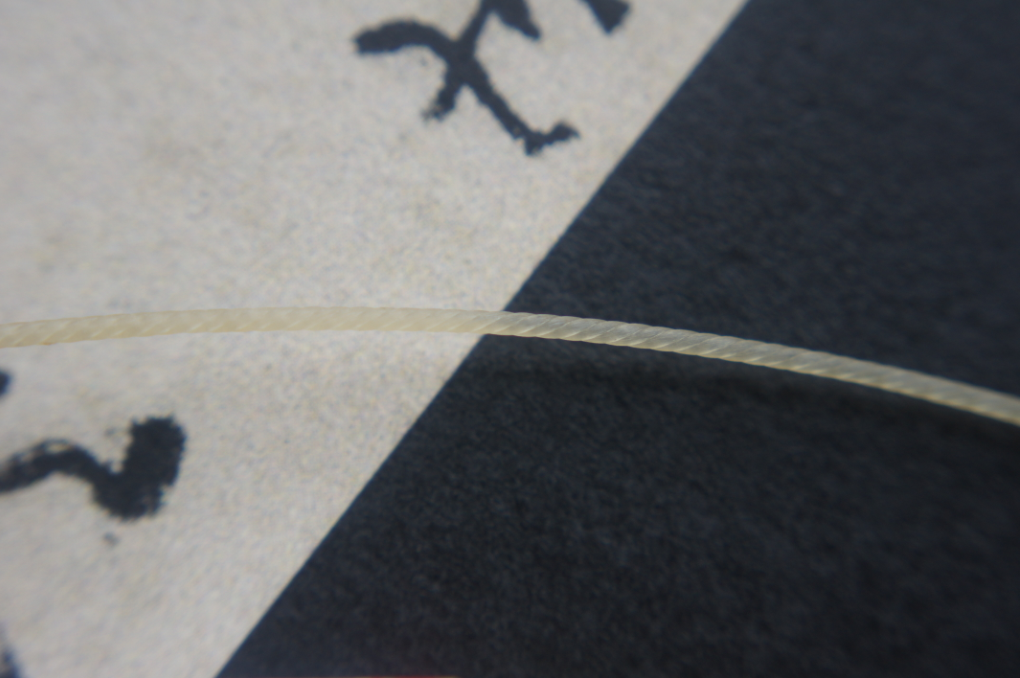 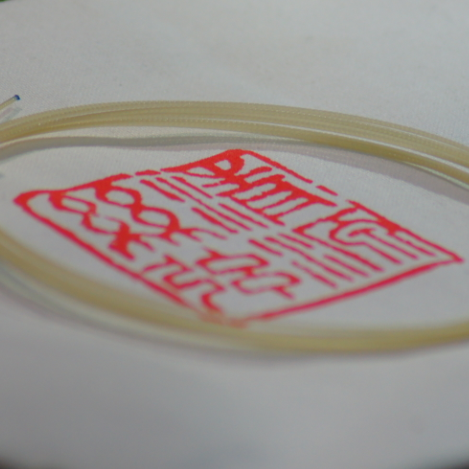 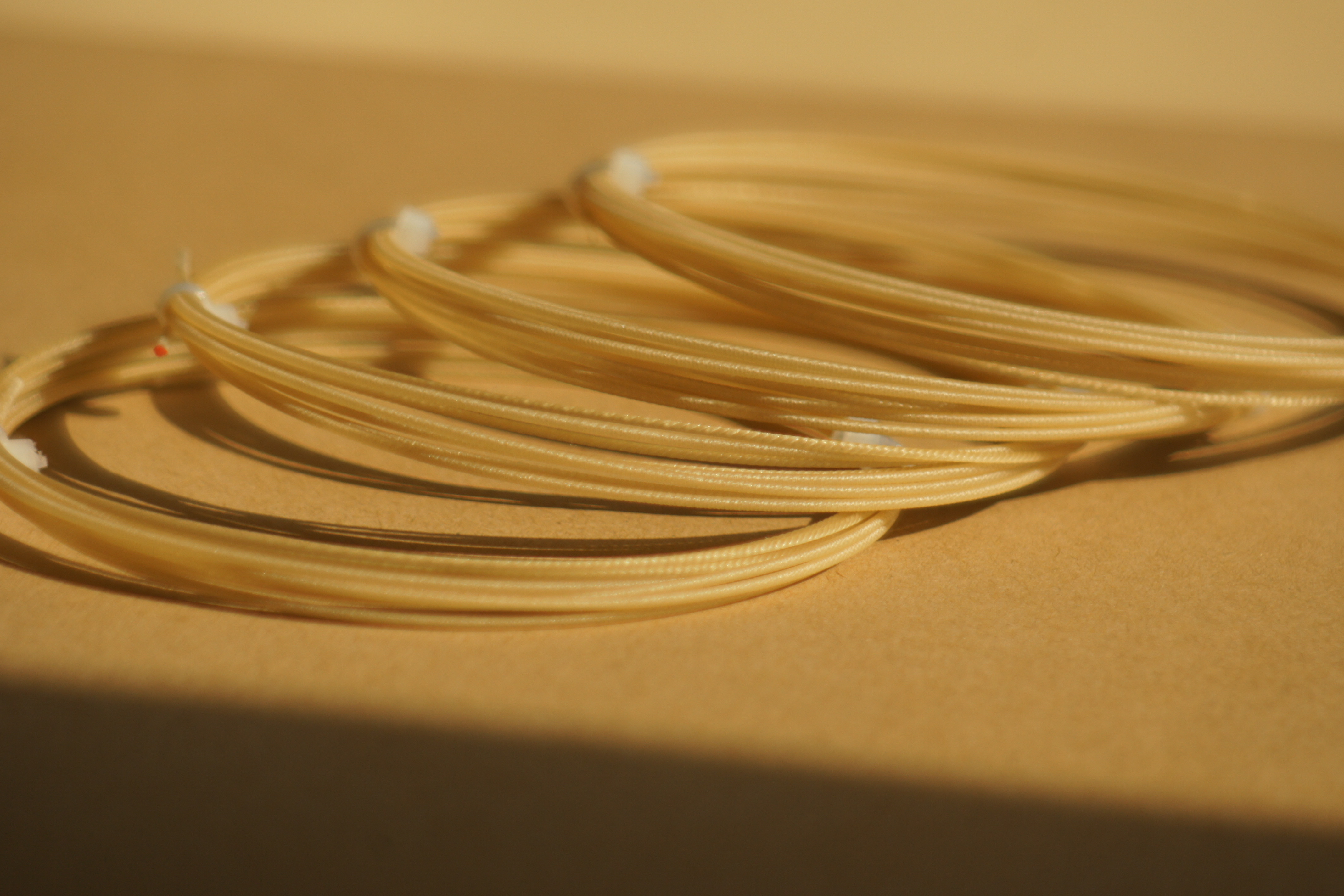 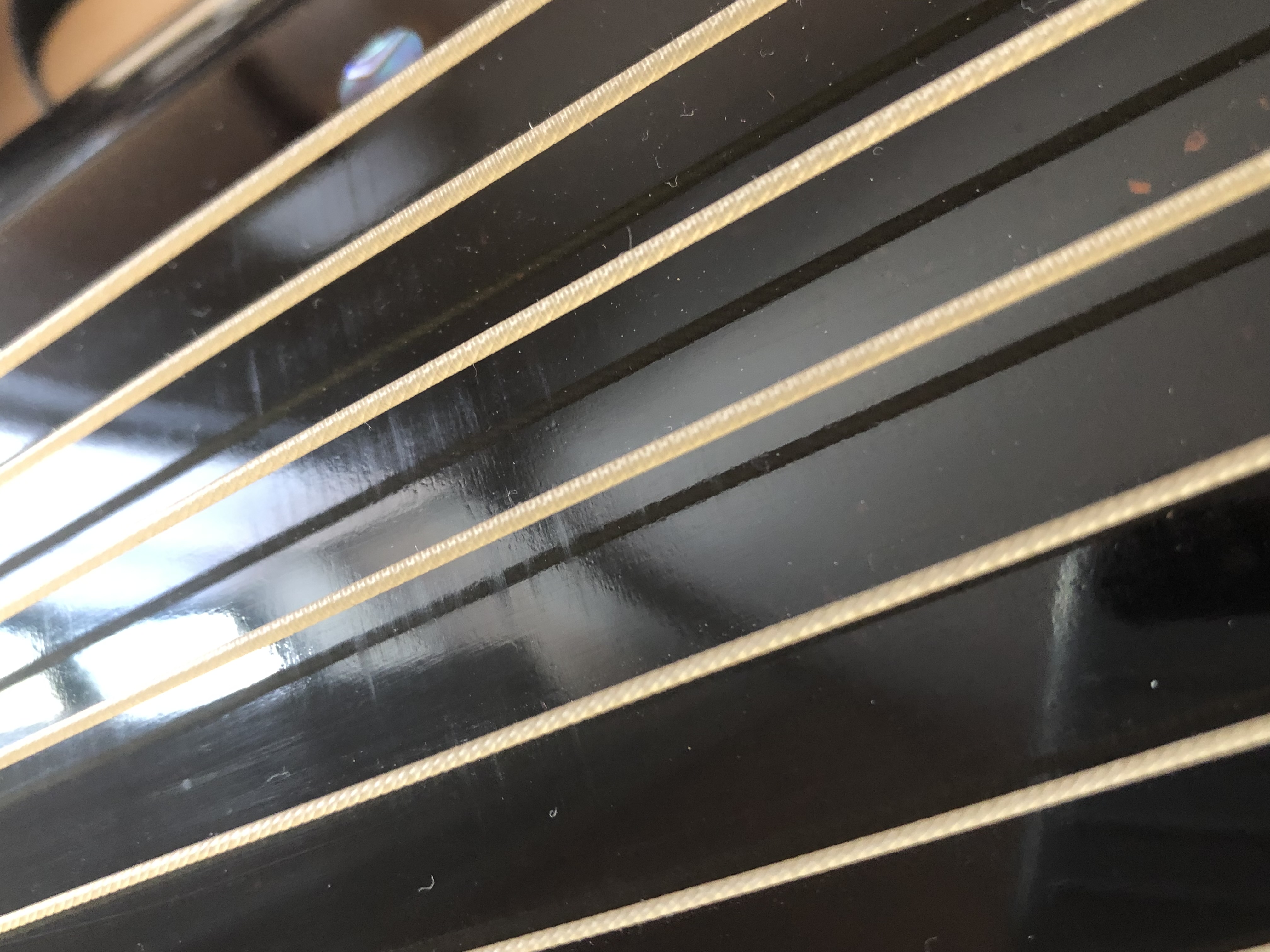 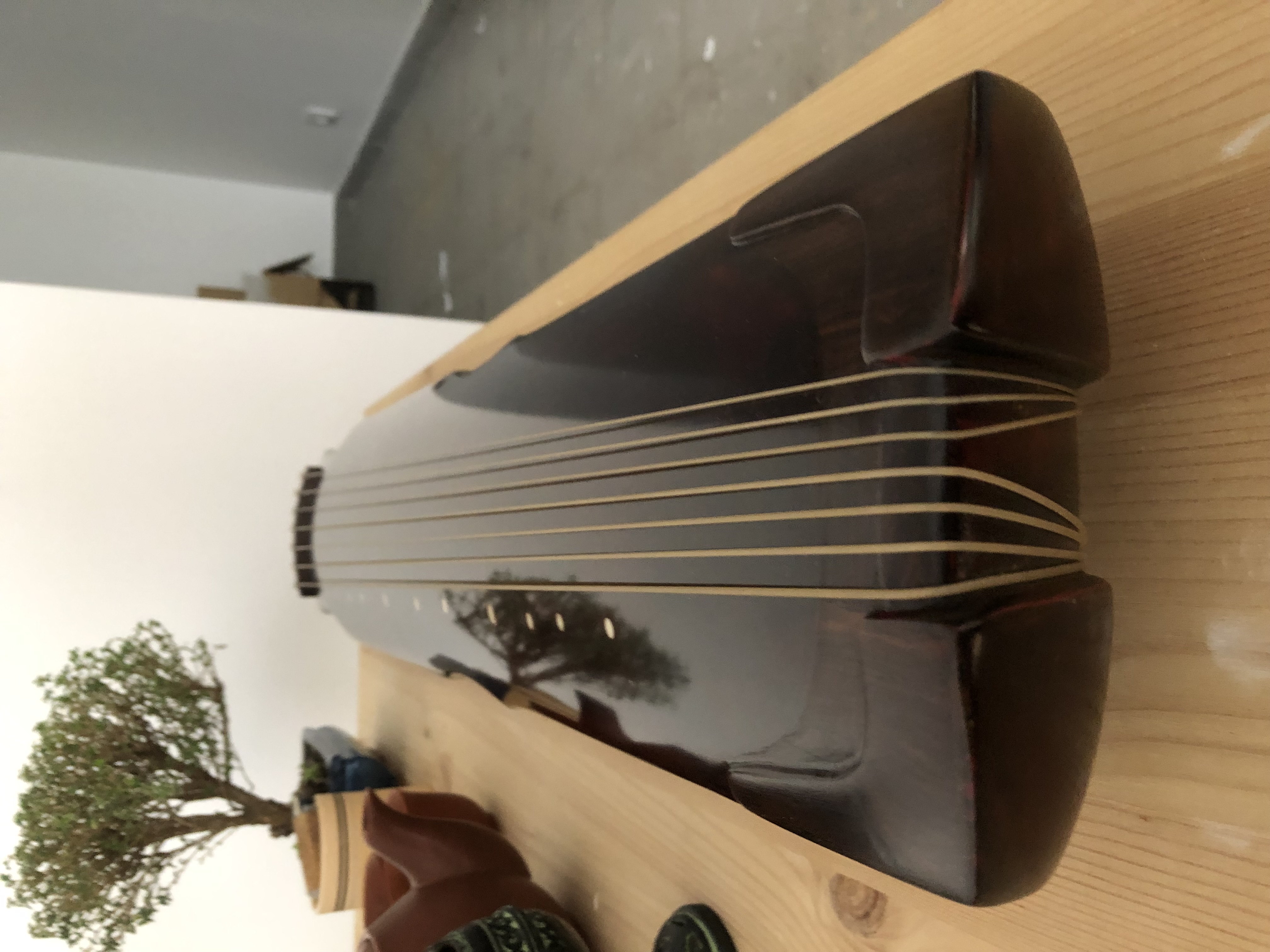 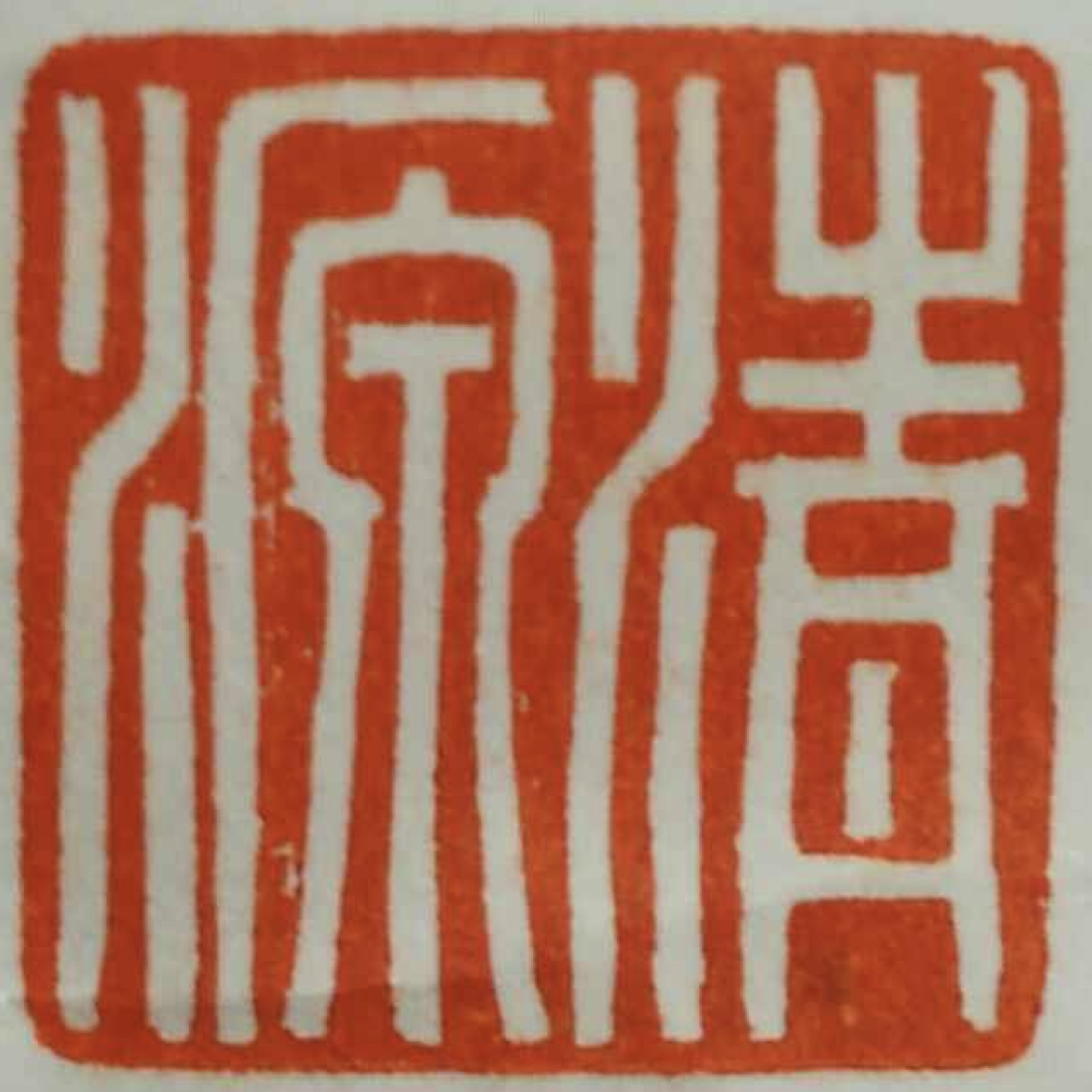 清源 (Qingyuan) is a maker of silk strings in Changzhou, Jiangsu, just northwest of the famed silk string city of Suzhou. I tested the “normal” weight set on two paulownia/catalpa instruments but not the “heavy” weight version, over a seven month period.

Their appearance is strikingly smooth and translucent, a light honey colour. Tying the knots can be  a little tricky as the over-wound strings are very tightly wound and a little practice might be needed. They are astoundingly smooth to play upon. Fingers glide on them. The over-wound strings particularly are surprising. The “breathing” sound of the finger moving in 吟 yin motions on the strings is not lost or compromised. With instruments tuned to have string 1 at a modern Western A, rather than C, in the hope of not suffering breakages and to allow for more instrument wood resonance and a sweet tone, there was no slap on the lacquer of the first and second strings, given that I play with my hand inclined to the outside, as van Gulik says “simultaneously half of the finger and the rim of the nail”, which normally reduces this problem completely. Pulling directly at the player with long nails may have a different effect though.

The even nature of the tone of the strings, and the similarity of the over-wound strings to the non over-wound strings is surprising. There is no noticeable jump of timbre between the over-wound and the remaining strings but the transition is very natural. The purity of the harmonics also is surprisingly clear. It is easy to hear many tones of the harmonic series in any single plucked string. In fact, it is possible often to play a single string at a harmonic node and listen to a whole chordal triad.

The strings 5-7 do fluff up a little by playing, as we ought to expect, but not sufficiently to need the application of glue or egg white. There is no buzzing of the over-wound coils on strings 1-4, meaning that the core and over-winding threads don’t separate, this not being the case with other strings I have tired before.

The diameters measured after seven months of use, by using a micrometer on the portions not played (i.e. under the guqin), under tension, and at pitch when measured, are as follows:

The strings are very suited to tonally conscious and deliberate playing. They urge the player to a more open and pensive approach due to the extremely rich overtone purity and length of tonal resonance. Playing on them feels like playing on thin rods of jade or (dare I say it?) ice. The response always available, always alive and always calm. The resilience is also interesting in that the strings respond better than expected to quick finger movements on a single string.

Words from the maker:

“Qingyuan silk strings are made using the process of, or according to, the ancient method of production, from the glue formula and cooking, while never using modern chemicals and without the addition of other traditional Chinese medicine ingredients. The silk processing, the twisting of fibres and winding, is completely holistic, rather than prescribed by the process of parameters of strict digitisation, in order to maintain the quality of continuous stability, more continuous quality and  improvement to provide assurance that Qingyuan strings can ensure that the over-winding never slips, that the wound string surface is smooth and does not scrape on the hand. All the strings from 1 to 7 are translucent, while most of the other brands of strings are not smooth and translucent. This also shows that the whole of the Qingyuan string is extremely tight, and the sound quality in this state is the sound of stone. When playing with the right hand, the touch is smart, the spring-back resilience feeling is different from stiff steel strings, it is more conducive to the relaxation of the hand. Playing with the left hand, string 7 does not feel like a saw, as so usually other strings do. It is a misunderstanding to assume the strings must be like files to be able retain a very good finger breath tone.

“In fact, the information obtained by measuring the old vintage strings is very limited. Or you could say it's wrong, because it affects the result from the very beginning of the first process. But at the end of the last process, the data of the first process can no longer be measured. This is summed up by a Chinese idiom, called the blind man touching an elephant.

“"Qing Yuan Silk String" at the beginning of the use of the new string, it will feel slightly sticky to the hand, the reason being glue on the surface of the string, people with sweaty hands may feel this more, yet it reflects the expected situation, and will become smooth after a few days of playing.

“"Qingyuan Silk String" uses traditional fish glue as the adhesive. After the fish glue dries out, the string will inevitably show a certain rigid state. When it undergoes acute angle bending, the silk  string will produce a crack and lose its original translucent state, especially prone to this being the  5, 6 and 7. Therefore, when installing the strings avoid significant bending. When making a fly  knot, pull the silk string with the thumb and index finger to avoid bending the silk string. Of course, there is no need to be too nervous about the crease, you can first stretch the strings to tension again, and after the strings are stretched on the guqin, use a small piece of cloth, soaked in boiling water (the hotter the better), and then squeeze out excess water. The damp cloth is wrapped upon the crease in the strings while hot, remaining for a few seconds, removing the crease which will basically disappear. This method is only applicable to the repair of strings bonded by fish glue, and not applicable to strings bonded by other adhesives.

“Proper maintenance should be:

Keep your fingers clean and dry before playing, and keep your nails trimmed and smooth. Secondly, when pressing the string, the left hand finger uses the method of "half flesh and nails". Usually, if the left hand finger is correct, the silk string will become more smooth and transparent after a period of use. If there is a small amount of fuzz on the surface of the silk string after using the right hand plucking for a period of time, you can smear a small amount of egg white on the fuzzy part, smooth it along the surface with your fingers, but do not smear the whole string, and continue to use it only after it is fully dried.”

About the maker, in his own words:

“As I majored in pharmacy, I have been engaged in chromatographic and chemical analysis of drugs and extraction of traditional Chinese medicine. It is not difficult to solve the problem of string glue. From October 2014, it took nearly 3 months to basically complete the research of glue. And because I was the the company's engineering manager and quality manager, the automation of electrical equipment contact, it was possible, at the same time, with a little more than 4 months, to solve the problem of easily making the wrapped strings. By the end of 2016, I completed the digitisation of the string process, which allowed me to improve the string technology through a more scientific test programme. Also in this process, after three major equipment improvements, the design and manufacture of more stable and reliable silk string production equipment for the quality of silk string and further improvements provide a guarantee since then to process the silk raw material to the finished product as a result of the whole process of research. (Because before this, most of the string makers could not complete the whole process research, and very few with the whole process, using very rudimentary equipment, almost by personal experience and intuition in the production, and therefore quality can not be guaranteed.)”

Yin Xiao has released a solo album with both of my qin instruments strung with these strings which can be downloaded here or streamed by following this  link. This recording was made professionally in a studio environment and without post-production tonal adjustments of any kind.